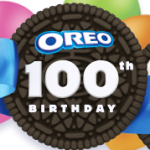 This year is the 100th Birthday of the Oreo.  I was not aware of this fact until I read about it in the New York Times.  They were doing an article about it

because of the unique advertising campaign, which has a different ad for the Oreo every day for 100 days.  The ads seemed to be based on events and our present society thinking in 2012.  For example, the article showed three cookies, one based on the colors of gay pride, one for pirate day and one for the Mars Rover.  I thought this was very cool and clever until I started thinking about Google.  Isn’t this what Google does every day?  Ok, well not every day.  But it has a staff of people to make ads or graphics from the name of its company, “Google,” for current events.  Usually they are very good and sometimes they are even interactive, for example the one where you could actually play a keyboard and make sounds like a piano.  Obviously someone could have come up with this same idea or maybe had a Googlized brain storm.  It still is a good plan to get people thinking about Oreo’s again, even if not original.  It actually made me remember coming home from Los Angeles on a seven hour flight.  I was so starving that even my Tums started to look good.  All at once I remembered that they had snacks on the plane somewhere.  I asked the flight attendant and one of the choices was mini Oreo cookies.  I hadn’t had for these for years, so after paying for them (of course) I was handed a pretty large box, which I never thought I would finish.  I somehow managed to scarf them all down and they were great.  Even thinking about them now, I am getting hungry.  So happy birthday Oreo cookie!