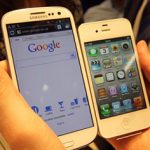 Iphone 5 is Singing the Blues

If you remember from my previous post about the Iphone 5, I talked myself into buying it, even though I had to buy the full price.  I am now facing buyer’s regret.  Yes, it works and is fast.  There is nothing wrong with it.  But, other than it being slightly longer, I don’t see anything much better than my 4s.  I guess I just don’t feel it was worth the $650 I paid.  I did sell my 4s at Gazelle, an internet website, for $400.  So I really paid $250, plus a few weeks with no phone at all.  Apple said two to three weeks for them to send it, but it was four to actually receive the phone.

This past weekend, just before receiving it, I went to the AT & T store to check out the Samsung models.  I really liked the Note and the Galaxy IIIs. 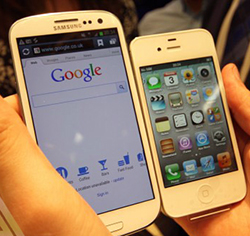 Their screens were so much bigger than the Iphone’s screen.  That was basically the selling point for me.  But the salespeople talked me out of them.  They were given the Galaxy to use, but they had personal Iphones and preferred to use them.  They said the Android operating system on the phones (Ice Cream Sandwich) was okay, but not IOS6, which is on the Iphone.  I think that a lot of the programs or apps that come with the Iphone have to be first found in their app store and downloaded separately.  I really wanted something different though, after owning three Iphones and was convincing myself to buy the Samsung.  But there was a deal breaker – the voice recognition that has come to be known as Siri.  I have gotten very used to using the little microphone for texts and emails.  I don’t like to type much anyway, but it is very hard and slow on the glass.  For me, this little mike was 99% accurate and I very rarely had to fix the words that it typed out for me.  I was told that the apps that I had to look for on the Samsung were not accurate at all, so I would have to go back to typing again.  What??  No dice.  Back to the Iphone for me.  And now I just realized that my Mac has the same ability.  I may never have to type again.