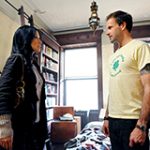 In the Elementary episode from February 14, 2013 Detective Bell gets shot at while in his car.  It was an exciting opening, but this detective 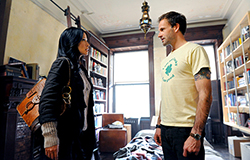 s series is usually different from the “a dead body is found” scenario norm.  The bad guy that is the most likely suspect to have shot up the car is found dead.    The police detective is being framed and Sherlock needs to find out who is doing it. Sherlock finds a gun hidden in Bell’s ceiling that matches the bullet in the dead man.  The two conspire not to tell the captain their findings so they can work together to find out who is doing this.  While Bell starts to believe his convict brother might be the culprit, the brother gets shot.  The ends are brought together rather quickly by a tidy story about a woman cop that they introduced in the beginning of this episode.  Sherlock had originally seen this woman while passing by her in the station, realized she was a boxer from the marks on her hands, and wanted her to teach self-defense to Watson.  Now we find out that this woman has framed Bell.  It was a complicated story, which was quickly summed up toward the end.  Her partner from years ago had killed himself when the two of them (mostly him) were implicated in some bad dealings.  Bell apparently was in on taking the partner down and this was her revenge.

It wasn’t the best episode, but the relationships between the people are what make this series better than most.  Bell and Sherlock developed a deeper working partnership and trust that both seemed to appreciate.  Sherlock and Watson cemented their partnership.  We first see Watson with her therapist or boss, who has been seen in previous episodes.  The therapist asks her why she is still working with Sherlock when she is not being paid any money and she is having dangerous criminals almost kill her.  Her advice – time to move on to another client.  Sherlock confronts her later with a proposition.  He knows she isn’t being paid and that she lied to him when she told him that his father had extended her contract.  He wants her to work with him as they have been and he will pay her.  At the end we find out that she accepts and their relationship has moved to another level.

Will Watson live in the house with Sherlock?  Will their relationship get romantic?  Will they do great battles of will?  We shall see what the writers cook up.