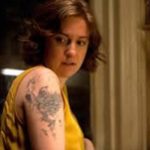 I don’t even know what to say.  Tears were running down my face.  They just came out by themselves in a long stream and I couldn’t stop them.  What a 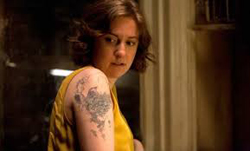 great show this was.  I could say that I wish all of the episodes were this good, but maybe everything had to lead up to this.

Hannah is a complete mess by this point and even cuts her hair by trying to imitate a model in a magazine.  It doesn’t come out well to put in mildly.  Her editor wants work from her, but she is in no condition to give it to him.  He threatens her with a legal suit to get back the money he gave her in advance for her writing.  She pleads with her dad to lend her the money, but as usual he pushes her away.  Her ear is still bleeding and hurting after she attacked it with q-tip.  Her neighbor tries to recut her hair and does an awful job and also rejects her pleas of help.  He tells her she is selfish and self-absorbed.  Hannah even makes a desperate phone message to Jessa. She leaves her a long unhappy phone message that details all of her woes, including the fact that she can’t talk to the anorexic Marnie.  Marnie does come by her apartment to check on her, but Hannah hides from her.  Marnie doesn’t really push all that much to find her, even though her computer was on and it looks like she is in the middle of eating and is most likely there.

Marnie is in great shape.  After a push-pull dinner with her on again off again boyfriend, he declares his love for her and tells her that he has always loved her.  She is smiling all the way.

Shoshanna breaks up with her older boyfriend.  She finally realizes that he is holding her back and will never do anything in life.  We see her at the end kissing a tall blond guy in a bar.

By the end, we hold out little hope for Hannah.  Her old boyfriend, Adam is shown having sex with someone and then when alone takes a hammer to his apartment.  Bang, bang, bang as wood flies in every direction in his seemingly life frustration.  Suddenly the phone rings – it is Hannah.  He runs without stopping, bare-chested, all the way to her apartment.  He knocks down her door when she won’t answer.  He finds her under her blanket in her bed and picks her up.  The tears flow.

They could not have written a better ending, or a better episode for this series.  We will just have to wait to find out what happens for probably a year as the series will be off the air for that long.  Their are a lot of unanswered questions, although what we think in our minds might be better than what they will write when we see it the next time.  Will Marnie get married?  Will Shosh become a loose woman?  Will we ever see Jessa again? Will Hannah recover and break up with Adam?